Carnage on the Highway: The Belize Air Crash of 1987 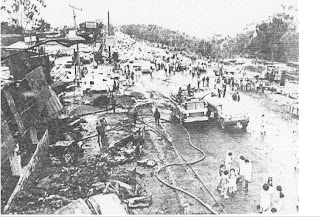 Charred debris litters the Toluca-Mexico City Highway after the crash of a Boeing 377 cargo jet.

The Toluca-Mexico City highway, east of the sprawling Mexican capital was full of commuters at this time of day. Weekend was approaching and many people and families took advantage to leave the capital for outings in the surrounding countryside. A light drizzle fell in a cloudy sky.

Near Kilometer 16 of the six lane highway, a small diner/gas station called El Tras Lomita was full of regulars, eating a meal or having a drink at the bar. People outside filled their tanks and headed off.

An old World War II era Boeing 377, Belize Air International four engined jet bound for Miami, Florida took off from Benito Juarez airport. Inside were 8 people, 2 American pilots and the rest riders and owners of prize racing ponies. The ponies were unusually agitated that afternoon, moving about the jet, as the trainers tried to calm them. The jet slowly climbed up into the cloudy skies.

Five minutes after takeoff, trouble started on Belize Air International. The jet wasnt gaining altitude as it now flew over downtown Mexico City. The altimeter was failing, the horses moving was rocking the huge cargo plane back and forth. The pilots struggled to pull up the jet as it flew directly towards one of Mexico City's tallest skyscrapers: The Mexicana Airlines Headquarters tower.

The people inside the skyscraper gasped in horror as they saw the antiquated jet fly straight for them and them last minute dodge the building. Disaster had been averted.

Another tall building loomed ahead. The Hotel de Mexico. The jet once again dodged the building, averting huge disaster but it was now certain something was terribly wrong with the flight. The could not risk turning back to the airport and risk losing control of the jet and smashing into the downtown area's heavily populated neighborhoods. 7 minutes after take off, they saw a possible landing area up ahead.

By this time, a problem with the plane's landing gear caused a short circuit and small fire. All was panic aboard the jet, as the horses lost their cool and caused the jet to rock even more. The pilots decided with a heavy heart to bring down the jet on the congested freeway.

Witnesses on land saw the huge silver bird lose altitude, trailing smoke, going down rapidly. The plane's engines roar was deafening. People ran outside to see what was happening and watching in horror as the jet came down.

One of the jets wings struck a high tension tower showering sparks. Amazingly it flew under a pedestrian bridge spanning the highway and hit some chainlink fences. By now the plane slammed belly first on the highway, raining fire and sparks and smashing into vehicles, killing some motorists instantly and horribly injuring others.

The jet skidded down the highway smashing into cars, trucks and vans, squashing them like mere metallic insects, bursting into flame and smoke. Up ahead, in the path of the out of control jet: The crowded Tras Lomita restaurant.

The jet broke in two. The tail section slammed into a three story home on the side of the highway. The rest of the plane headed straight for the Tras Lomita, slamming into it and exploding. The huge fireball enveloped the already stricken area, killing those who had been injured by the jet's crash-landing.

The scene was something out of Dante's Inferno. Burning smashed up cars, charred bodies and plane wreckage littered the highway. Others ran to help those injured.

Minutes later, firefighters and Red Cross paramedics aided the injured and picked out the bodies from the rubble. Almost all of those aboard the jet had miraculously survived the infernal crash. Out of 18 horses on the cargo jet, 16 were decimated, dead horses littering the road. 2 horses barely alive, limped about, and had to be put down due to their injuries.

Almost 50 people had died in the disaster. Dozens more injured and hospitalized. The American pilots were detained by Mexican authorities and questioned about the crash and the cause but later set free. The cause was determined to be overloading and a problem with the old jet's landing gear. A short circuit had affected the landing gear and prevented the jet from gaining altitude and almost smashing into buildings downtown.
Posted by E. C. Perez at 7:46 PM