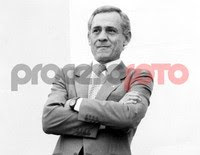 Architect Guillermo Carrillo Arena oversaw many new government projects that would revolutionize the capital city of Mexico in the 60's and 70's.

New projects that would create jobs, aid the poor, and provide shelter for poor and middle class families in Mexico City.
He oversaw the constructions of many tall buildings in downtown Mexico DF and the people were happy with the construction boom that provided so much for the 18 million people who called the valley of Mexico home.
In 1970, the dilapidated Hospital Juarez was renovated and a new 12 story "Hospitalization Tower" was erected on the corner of Jesus Maria and San Pablo streets, near El Zocalo. Built with two wings, it provided 500 more hospital beds, a maternity ward, surgery hall, and a helipad on the roof. This new hospital would provide care for the needy and poor families of the capital.
In the late 60's the huge Nonoalco Tlatelolco Housing Project was built. Huge apartment towers lumbered over ancient aztec ruins and the colonial church of Santiago near the Plaza of the Three Cultures. These housing units provided affordable shelter for working class families, with some towers providing luxury apartments and condos for well off families.
Across from General Hospital, he was a key architect in the ambitious Multifamiliar Benito Juarez housing project. More than a dozen new apartment blocks were built, all for the benefit of the middle class.
Carrillo Arena oversaw projects at the National Medical Center, and the building of Hotels and Condos in the crowded downtown area. He was so successful that he was soon named Minister of the Urban Development and Ecology Secretariat (SEDUE in spanish acronym Secretaria de Desarrollo Urbano y Ecologia) under President Miguel de la Madrid in the early 1980s.
Then on September 19th, 1985 the worst natural disaster to strike Mexico City in modern times, hit.
An 8.1 earthquake rocked the capital city for 90 seconds. Killing thousands of people.
The 12 story Hospitalization Tower at Hospital Juarez completely collapsed, killing patients, doctors, nurses and newborns. Around 500 bodies were pulled from the monstrous pile of rubble.
Two wings of the 14 story Nuevo Leon building at the Nonoalco Tlatelolco housing projects also came crashing to the ground killing more than 400 people, including 5 relatives of famous spanish tenor Placido Domingo
The Gynecology/Obstetrics tower at General Hospital, seven stories in all became a tomb for 100 new mothers, doctors and infants. Countless apartment buildings, hotels and office towers completely failed during the huge quake, which was followed by a 7.5 aftershock the next day.
Across the street the scene was equally devastating at the Multifamiliar Benito Juarez. 3 apartment blocks, the A1, B2, and C3, had completely collapsed, killing, injuring and emtombing dozens of people.
At the ruins of Juarez Hospital and General Hospital, rescue workers found that many of the support beams had unreinforced rebar in them. Many beams didnt even have rebar and most of the materials used were found to be of low quality. The walls in many of the buildings simply crumbled as if made of sand.
Shoddy construction methods, negligence and corruption had led to the failure of many of the buildings designed or whose building was supervised by Minister Carrillo Arena.
Many of the buildings had been weakened and damaged in previous temblor and nothing had been done to repair them. Money granted to make repairs simply "dissapeared.
The public was outraged. Visible corruption and abuse of power by Carrillo Arena and other officials caused the populace and survivors of the mega quakes to rally in the streets and demand his head.
Carrillo Arena attempted to satisfy the survivors needs by creating commisions to investigate and build new housing for those left homeless: only one catch. The housing was not going to be free. Those, left with nothing but the clothing on their back would have to fork over thousands of pesos for new housing designed and provided by the wonderful PRI controlled government.

After much public outcry and evidence of shady deals against him, Guillermo Carrillo Arena resigned as Minister of SEDUE in February 1986.
Posted by E. C. Perez at 5:13 PM