Plan Of Extermination at Oblatos Penitentiary 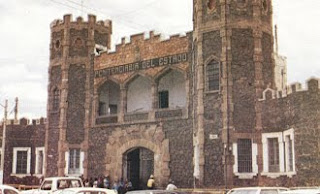 Oblatos Penitentiary in Guadalajara in the late 1970's

In the 1970's guerrila warfare was strong in Mexico. Groups like the 23rd of September communist league took hostages and planted bombs all throughout Mexico, fighting the authoritatirian PRI government. Many such guerrillas ended up at the Oblatos Penitentiary in eastern Guadalajara.

Many of the guerrillas arrested banded together in the overcrowded, squalid Jalisco State penitentiary. They slept in the same dormitories and helped each other out against agressions. Many "comrades" would be stabbed and killed in the prison's patios and hallways. The guerrillas were seen as friends by most of the inmate population but in 1977 the sinister Federal Security Directorate devised a diabolocal plan to exterminate all the guerrillas in Mexico.

The DFS would recruit goons in prison and pay them a sum of money to kill the guerrillas and stage "riots". In the faux riots, the guerrillas would be murdered, in the perfect environment. Casualties of a prison riot.

One day in September 1977 one of the guerrilla leaders imprisoned at "The Castle" as Oblatos was called, asked to speak to Warden Pedro Parra Zenteno. He denounced the conditions at the prison and asked for protection for a group of inmate trustees nicknamed "The Jackals" had been extorting the general population and abusing the inmates, stealing, beating and raping the inmates wives and sisters during visiting hour. The leader, as he spoke to the Warden, noticed 3 men in suits, sitting near the Warden, staring at him intensively. He later realized the men were DFS agents.

Warden Parra's answer was simple "Get the fuck out of my office."

The leader now realized something bad was amiss. Their days were numbered. The guerrillas took turns sleeping while others stood watch all night, in case someone should sneak in and try to stab them in their sleep. In early October 1977, the leader of the "Jackals"Reynaldo Arellano showed the guerrillas a fistful of pesos.

"Look what they've paid me to kill all of youse. Stupid boys!" he said with a cackle and walked away.

The night of October 9th, 1977, the guards at Oblatos Penitentiary were told to go home. Some guards made it to Dormitory "I" where the guerrillas stayed and out of their gun holsters, took out some shanks and gave them to the group of prisoners.

"Here you go boys, God protect all of you." said one of the Guards.

At dawn on October 10, 1977 the guerrillas noticed the Jackals and several other prisoners outside at the patio. It was 5 am and the population did not go out to the yard until late morning. Something was up. The Jackals, armed with sticks, knives, machetes and other tools rushed the guerrillas. The Guerrillas fought back and were chased all the way back to the dormitory.

Thats when the Jackals and DFS plan of extermination went awry. The general population, seeing how the Dormitory "I" boys were being attacked, counterattacked and rushed the "Jackals".

The hunters were now the hunted.

More than 500 inmates went after the Jackals, and beat them mercilessly. One locked himself in a cell. The inmates showered him and the cell with fuel and tossed a match. The Jackal trustee ended up blackened, bloody mass of charcoal.

One of the Jackals, the one responsible for the rapes of their sisters and wives, received the most cruel treatment of all. His genitals were cut off with a rusty knife and shoved in his mouth. His eyeballs were poked out of his socket and a steel bar was driven through his skull. His body was chained up to a wall for all to see.

As the bloody riot raged on at the Jalisco state penitentiary, the remaining prison staff ran for the exits. The inmates were massacring each other. One by one, the bodies of the trustees were piled up at the gate leading from the administration building to the jail. Laughing, one of the inmates would bring a wheelbarrow and dump a bloody corpse at the door.

Riot police assembled outside the prison and the Mexican military surrounded Oblatos. At night, the riot police in full gear entered with electric nightsticks and shields and quelled the riot. The rioting inmates issued a statement to radio and TV saying what they had done was not murder but "justice".

17 inmates died in the bloody riot, the worst riot in Jalisco state penal history. Dozens more were injured. Many of the inmates say the death toll was much higher, perhaps 50. The horrible riot marked the end of The Castle. Oblatos State Penitentiary was closed down and all inmates were transfered to the new Puente Grande Maximum Security prison south of the city. The Castle was bulldozed and is now a park.

One of the survivors, recalling the 1977 riot thanks the general population of Oblatos for their survival that hellish Autumn day.

"The "Rancho" (gen pop.) saved us. They served as a barrier protecting us from the Jackals. If it weren't for them, we would all be dead. The DFS would of gotten away with it."
Posted by E. C. Perez at 4:28 PM