Christmas Slaughter: The 1988 Riot and Assault at the Tepic Jail

All seemed normal during visiting hours late in the evening of December 20, 1988. Christmas was approaching and many families made the visits to the Nayarit State Penitentiary "Venustiano Carranza" in Tepic the state capital to visit their loved ones who would sadly spend their holidays in the squalid prison.

The otherwise tranquil visiting time was soon interrupted by a group of inmates brandishing guns. Six men with firearms caused pandemonium prompting the women and children there to flee for their lives. The prison's guards confronted the armed inmates and a shootout ensued. Their escape attempt had failed

273 adults and almost 200 children were now trapped in the prison, as the rebellious inmates took guards, prison staff and the prison's warden Samuel Alvarado Alpizar hostage. Other employees at the penitentiary fled and hid inside offices, stacking tables and file cabinets against the doors to keep the inmates out. Soon about 50 more inmates joined the six armed prisoners and a riot ensued.

The inmates demanded armored cars so they could flee the prison and more weapons. During the 38 hour standoff with Nayarit State authorities, police and army soldiers who surrounded the prison, Warden Alvarado was shot dead, along with 2 other hostages. The morning of December 21st, police managed to free the more than 400 hostages trapped in the prison, using ladders and bringing them out through the prison's administration buildings windows.

As the riot and standoff grew longer, Nayarit State officials declared themselves incapable to deal with the situation and requested aid to Mexico City.

On December 22, 1988 a government plane landed at the airport in Puerto Vallarta, Jalisco, about an hour from Tepic. Inside the jet was the Mexican Federal Police's elite SWAT team Los Zorros (Foxes). Mexico City had sent Los Zorros to quell the rebellion at Tepic jail.

Later that day the 130 men strong Zorros team formed outside the penitentiary and blew open the gates. The team, armed with assault rifles faced off the inmates, and engaged them in a bloody shootout in which the Zorro leading Commander, Jorge Armando Duarte was shot in the forehead and killed by one of the inmates as he tried to negotiate with them into surrendering. The rioting inmates, numbering about 50 were subdued and the remaining hostages were freed.

National and International news crews gathered outside the prison were allowed entry and an NBC crew filmed 5 of the inmates, laying face down and being questioned by the police commando team. Then something strange happened

A hard faced man, one of the Zorro commanders yelled some orders to his men and his group once again assembled outside the prison. Only this time, instead of batons, they were handed machine guns.

"Reporteros y chismosos! A chingar a su madre ! Vayanse!" "News crews and nosy people, get the fuck out of here!" was the harsh command given by the Comandante to the journalists and family members gathered outside the jail after the storming of the prison.

The Zorro team once again entered the Tepic Penitentiary, when all seemed in order and the inmates controlled. Shots were heard.

For about 20 minutes, the cracking of machine guns could be heard inside the prison. When it was over, more than 35 inmates were dead. Bloody and shot up bodies were scattered throughout the now destroyed administration building. Some bodies of the prisoners had marks of execution and the coup de grace. Some showed evidence of having been shot as they fled or as they had been on their knees. The inmates filmed by NBC, subdued and controlled, were among the dead.

Days later, Nayarit state officials denied knowledge of the prisoners filmed alive who would later be found dead. A spokesman for the Nayarit state government said "I cannot explain this to you, no we have no information on the matter". Seemed like no one with authority knew what had happened inside the Venustiano Carranza prison

Prison clerk and hostage Patricia Castillo told reporters after the massacre; "The Zorros entered the prison angry because their commander had been killed. They began shooting indiscriminately".

Weeks later, the men participating in the assault on the prison were reprimanded and some were jailed for their brutal actions.

Vengeance by the Zorros for the death of their commander? Excessive use of brutal force? Senseless agression? Or all of the above? What was known was that nearly 40 inmates had been killed or rather executed on that cold December night in 1988 when Christmastime was stained by blood and bullets at Tepic penitentiary.

The "Zorrazo". "Fox Attack". An event that the victims families or the people of Tepic, Nayarit would never forget.
Posted by E. C. Perez at 9:50 PM No comments: 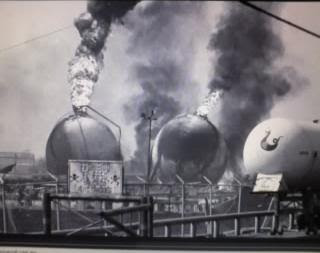 San Juan Ixhuatepec is a suburb of Mexico City, north of the capital just past the Periferico beltway. Middle class homes mixed among brick and tin shacks of low income families, living in the shadow of the huge Petroleos Mexicanos LP Gas Storage Facility. 6 Huge Spherical tanks holding thousands of liters of pressurized Liquid Petroleum gas loom in the horizon. Next to the huge spheres is a cylindrical tank farm holding even more gas. Next to the PEMEX installations is the Unigas Gas Distribution Center. 12 Gas Storage Facilities dominate the area of "San Juanico", including Gasomatico, Unigas and Gas Vela.

Since 3 AM on the morning of November 19th, 1984, there was a leak in an 8 inch pipe leading to one of the Pemex spherical tanks. The tanks had been nearly empty a day before and were now being refueled via pipeline from the Tula, Hidalgo oil refinery. For almost three hours, the gas cloud lingered throughout the facility.

Even some people living near the plant awoke from their sleep due to the strong smell of gas. At 5:40 am, the gas cloud reached a point of ignition, a spark from a delivery truck or a flare at the plant, the source of what was to happen to this day is unknown. What is known is, that the gas cloud reached a point of ignition, causing a blast and fire that destroyed 10 homes.
6 minutes later, at 5:46 am, a raging hell was unleashed on San Juan Ixhuatepec.

The fire from the first minor blast reached 4 of the 6 spherical tanks,which were filled to 75 percent capacity, all four exploding almost at once in one huge catastrophic BLEVE blast. The tremendous blast was recorded on Mexico City seismographs and the huge mushroom cloud of fire reached 500 meters into the dawn sky.

The monster of fire devoured everything around the plant, instantly incinerating homes, people still asleep in bed, pets, livestock and vehicles. 5 city blocks were virtually razed by the hellfire and people, sleeping in their beds still on getting ready to go to work or school, were practically vaporized by the furnace like heat and fire. The fires and explosions also spread to the Unigas and Gasomatico plant, spurring more explosions.
After the 12 huge blasts that followed, the survivors of San Juanico were assaulted by a wave of heat and light. As if the sun had fallen on San Juan Ixhuatepec. Naked people or others, simply in their underwear and pajamas ran throughout the shattered glass and debris that littered the streets.

The blasts and fire seemed to come from everywhere. Flaming droplets of liquid petroleum gas rained upon the fleeing survivors causing horrendous burns. People on fire ran throughout the neighborhood, the oxygen fanning their flames until some, reaching the nearby Los Remedios river, threw themselves into the dirty waters to douse the fire that ate at their flesh. 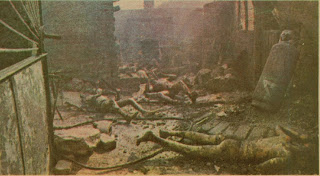 The bodies of one family of many who were killed in the blasts and fire litter the ruins of their home.


Charred bodies littered the street. Burned survivors, dazed and in shock wandered throughout the street, the acrid smell of burned hair and flesh hanging over the town. The huge roar of the LP gas burning could be heard miles away. The huge flames at the plant, reaching 500 meters, could be seen from miles away in central Mexico City.

At 6 am, the first fire trucks arrived into San Juan Ixhuatepec, ready to battle the huge conflagration. Shortly after all access into San Juanico was cut, causing huge traffic jams. Only ambulances, paramedics and firefighters were allowed into the ruined town that now resembled World War II Dresden. The first reporters to the scene covered their noses as the horrendous stench of burned bodies blew with the wind. The roar of the fire and more explosions could be heard. 30 ton steel Gas tanks flew through the air like rockets, one falling miles away and crushing a 2 story home, killing those inside. 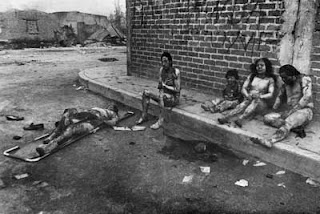 
After hours of firefighters battling the blazes, the toll was staggering. At least 503 people were dead most reduced to charcoal or scorched bones. At least 600 more were reported missing. More than 900 were injured, 60,000 were made homeless, most of the homeless and injured were housed temporarily at the Basilica of Our Lady of Guadalupe in Mexico City, a famous shrine. The charred bodies, mostly just unrecognizable piles of charcoal were placed in plastic bags and taken to a huge warehouse for Identification. Most of them were burned beyond recognition, impossible to tell their sexes much less who they had been in life. The Mexican Army now patrolled the streets to prevent looting. Almost 100,000 people had been evacuated from the area on city buses and taken to shelters.

After the blasts, Mexican society demanded to know what had happened at San Juan Ixhuatepec. Pemex issued a statement blaming Unigas Co., who had a storage facility next to the Pemex plant. They said an explosion in a tanker truck unloading gas at the Unigas plant had produced the catastrophe. Evidence pointed to the disaster originating at the Pemex plant. Surviving workers at the Pemex plant said a gas leak had been detected but nothing could be done, it had been detected too late. The gas cloud would soon reach the plant's flare so most just ran for their lives uphill, away from the blast zone.

Petroleos Mexicanos, after admitting its fault, promised money and shelter to those affected by the blasts.

On November 20 and 21st, most of the bodies were buried in three mass graves. Priests holding buckets of holy water sprinkled the huge tranches that would hold the 300 plus bodies that were never identified.

A year later, in November 1986 President Miguel De La Madrid promised aid and new homes, food and clothing to the survivors. Most would need surgeries and therapy to help with their burns. All the promises were later forgotten. A "Polygon of Security" was designed in San Juan Ixhuatepec to prevent more dangerous businesses to establish in such a densely populated area. The Mexico City government promised to relocate and banish the gas plants from San Juanico.

To this day, November 2009, 6 Gas storage areas remain. Including the Pemex facility which was rebuilt as the Satelite Norte plant. New gas stations and flammable materials storage warehouses were built inside the so called "Polygon of Security" ignoring a 24 year old Presidential decree. 14 businesses are classified as "dangerous to the community" with 12 of them being at risk of an explosion.

Survivors are still waiting for the money and aid promised by Petroleos Mexicanos 25 years ago. They are forced to work however they can, or beg for money on corners, covering their burned faces and limbs in shame, others not caring and living their lives, knowing they survived one of the worlds worst industrial disasters, that according to some, probably killed more than 1,200 people.

According to a El Universal newspaper poll, only 30 percent of people ages 18-25 know what happened on November 19, 1984 in San Juanico.

After the blasts, as is common after disasters, inappropriate and morbid "jokes" were made up by Mexico City residents.

Question: "How can you fit 500 people from San Juanico inside a VW Bug?"