Slaughter At The Tula River 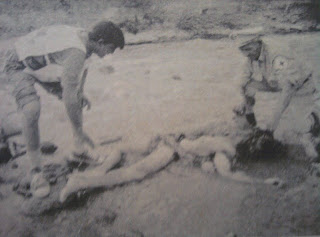 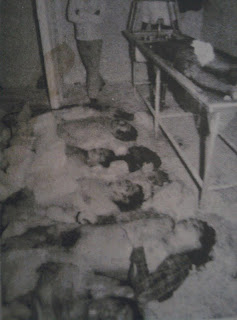 In early 1982, Mexico City residents and Mexican society at large were shocked by a grisly discovery upriver, some miles north from the capital city. The evidence of a grisly crime, shocking at the time, tame by today's standards, nevertheless it was a gruesome occurance, that left more questions than answers.

The morning of January 14th, 1982, a peasant walking the riverbank of the muddy and polluted Tula river made his daily walk to the fields. He noticed something peculiar washed up on the bank. He bent down and picked it up and dropped it immediately in horror: It was a severed human head in advanced state of decomposition. Glancing towards a chute that spilled waste into the river he saw one body, then two, splash into the water. Soon there were more than 10 dead bodies splashing and bobbing in the dark waters. Scared out of his wits, he ran to notify authorities.

By the time the police reached the Tula, outside the town of Atotonilco, in Hidalgo State, curious villagers had gathered to watch the gruesome spectacle. The bound and gagged bodies of dead men, floating in the waters of the river. Authorities called a Red Cross diving team from Mexico City and they recovered the bodies. 12 in total.

All were men and were in different states of decomposition. All bodies showed signs of being brutally tortured. One body was decapitated. Another had its arms chopped off. Another was missing a leg. All had broken bones, bruises, and cuts. One had its belly slashed, perhaps with a machete. Another was shot ten times with an automatic rifle. All were blindfolded, gagged and had their hands tied behind their backs. All had the coup de grace: a single gunshot to the forehead or the base of the neck.

Who were these men? Victims of a drug deal gone wrong? Vengeance among narcos? Central American refugees killed by mercenaries? Various theories popped up in the media who were all over the story. Front page newspapers and alarmist crime tabloids showed the gruesome pictures on their covers. Mexican news media dubbed the crime "The Tula River Massacre".

Mexico City coroners stated the victims had not been murdered in Hidalgo. Mexico City's Great Sewage Canal and sewer system all ends up washing out to the Tula river. The victims could of been murdered in some dark place in the city and dumped to the sewer and ended up in the Tula.

The men were well dressed and didnt seem to be farmers or Mexican even. They were tall and had South American features and were dressed in clothing with "Made in Colombia" tags. Mexico City Police Chief Arturo Durazo quickly dismissed the case as simply "a fight among drug traffickers than ended up in a massacre". Out of his jurisdiction, Durazo appointed himself head of the Tula River massacre investigation.

Two weeks later, two more bodies popped up in the Tula. They were found to be part of the original group of massacred. This brought the total to fourteen men executed. Who were these men? Why were they killed with such savagery?

The notorious crime was quickly forgotten however. The investigation went nowhere. Killings among narcos, a simple massacre. The death toll stunned the nation however. 14 men slaughtered savagely and dumped into the sewer. But the case was declared close and the men were surely foreigners who ran afoul of the wrong person and ended up dead. Years later, that would prove to be right on the money.

Chief Arturo Durazo Moreno was arrested two years later on charges of corruption, bribery, drug and arms trafficking and just being a world class asshole/douchebag. Turns out "El Negro" as his friends called him, indeed was the worst Police Chief ever. A book written in 1983, by his main bodyguard Jose Gonzalez accused Durazo of being the mastermind behing the Tula massacre.

A group of Colombian and Venezuelans nationals were picked up by the notorious Mexico City vice squad the DIPD. Rather than get in trouble, they cut a deal with Jefe Durazo. They would rob banks and deal drugs, with the DIPD's protection and the lions share of the loot would go to "El Negro". They would operate in the city and other major cities in Mexico and they would be untouched. For 2 years the gang robbed various banks, often ending in violent shootouts that would claim lives, police and bystanders alike, nevertheless they were never caught.

Heists in Guadalajara, Jalisco and Zamora, Michoacan netted millions in pesos. A great portion of the money went up to Durazo and his cronies. Durazo was a greedy man, he wanted ALL the money. He had the gang and their Mexican getaway driver, a taxicab driver named Armando Magallon Perez rounded up and "arrested" in June 1981, by the same DIPD agents who protected them. The head of the DIPD, Francisco Sahagun Baca, a notoriously sadistic and mean spirited man and Durazo's right hand man held the gang in one of the city's "secret" jails.

There they were tortured and slapped around, trying to force them to give up the location of all their loot. Whether the DIPD got what they wanted and were asking for, is unknown. The men were later held at La Castaneda psychiatric hospital. There they were held for months, subjected to waterboarding, electrical shocks on their testicles, whacked with heavy rubber hoses and finally sometime in December 1981, the men were taken to a Mexico City sewer gate at a unknown location in the dead of night, the blindfolded and bound men were shot and slashed to death and tossed into the sewer.

Durazo was arrested and sent to Federal prison.Manuel Cavazos Juarez, one of the lead executioners was arrested in 2007 after being on the run for 25 years. Sahagun Baca went into hiding where he was said to have been killed by Federales in a shootout at his ranch in Sahuayo, Michoacan in July 1989. Some say that Sahagun, a cousin of ex first lady Martha Sahagun is still alive and enjoys protection from his wealthy and powerful cousin but the truth is not known.

Mexican news organization in 2004 reported that a peculiar name was found on a guestlist for a party organized by Martha Sahagun, then President Vicente Fox's wife.