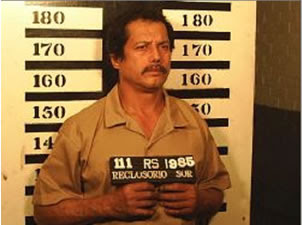 Army Sergeant. Ex Policeman. Army Parachutist. Nightclub Singer. Bank Robber. Kidnapper. All this and more was Alfredo Rios Galeana, pain in the ass for the Mexican authorities for years and admired by much of Mexican lower class society.

Born into poverty in 1951 in Arenal de Alvarez, Guerrero state, Alfredo Rios Galeana lost his father when he was only one year old. He left with his mother to Acapulco where she had to work hard now as a widowed mom, Rios Galeana didnt finish school. Soon after he and his mother moved to Mexico City.

When he turned 18 years old he joined the Mexican army. Due to his body build and height and natural proficiency for handling firearms and explosives he was made Sergeant by age 22. Using his combat skills learned in the military along with his knowledge of handling submachine guns and pistols, he started to rob stores and homes and a bank here and there. Pretty soon he ran afoul of the feared Secret Service police, who luckily for him, seeing how Rios Galeana was a bad ass, they employed him and soon after that he became a Police Officer for Mexico state (which borders the Federal District).

Despite Rios having a criminal record and being an army deserter he became policeman and under the protection of the Directorate of Federal Security, DFS (Mexico's CIA) he was allowed to keep doing his robberies. He started to make up his gang and together they would rent homes or apartments near or in front important bank branches all over the capital city and surrounding states, stake out the place then hit it.

During the 70's he was Mexico's most feared outlaw. Always armed with a machine gun and holding a grenade, he robbed dozens of banks in several states, not hesitating to shoot any cocky guard or policeman who tried to be a hero. But he wasnt all a mean bad ass bank robber ala John Dillinger. He had his soft side.

He would sometimes anonymously send the widows of the guards and cops he killed cash money for all their troubles.

One time during Christmas week, dressed as a businessman, Rios Galeana convinced a bank to open after hours, so he could give "his friend, the manager" a Christmas gift. Once inside, Rios and 4 others robbed the place.

Everytime he fell in the hands of the law, he would escape. Ever so vain he would comb his hair and flash a smile for the waiting reporters. He would joke and put his arm around the cops and jailers. So cocky and arrogant was he that sometimes he would announce by what date he would escape. And escape he would. In 1974 he fled the Tula, Hidalgo jail. Months later he was caught and sent to Santa Martha Acatitla prison in Mexico City and again he escaped.

When he wasnt busy looting banks, going on wild high speed chases and shooting it out with the cops, he had another passion: Singing.

He had plastic surgery done, he would don a Charro suit, and under the pseudonym Alfredo del Rio, he would sing at cock fight rings, nightclubs and he even recorded a LP singing his favorite ranchera songs.

In 1981 he once again was apprehended and Public Enemy number One was paraded in front of the Mexican press by none other than notorious Mexico City police chief Arturo Durazo. An arrogant Rios Galeana sat nonchalant in a chair and regaled the press with stories of his exploits, vowing to not stay in prison for long. He grew tired of jail and once again busted out, just as promised.

After the disastrous gas explosions in San Juan Ixhuatepec in 1984, Alfredo Rios Galeana donated thousands of dollars in cash to those affected by the blasts. In 1985 he was once again arrested and sent to Mexico City's Reclusorio Sur prison.

On November 22, 1986, an armed commando made up of men and women wielding machine guns stormed the prison courtroom where Rios Galeana was and tied everyone up. Using a hand grenade they blasted a whole in the wall and escaped. Once again Alfredo Rios Galeana was gone. This time for good. It was said his wife Yadhira led the armed commando that busted him and several others out of Reclusorio Sur.

But not for long. Alfredo Rios Galeana might of been a criminal mastermind but his skills faltered in his old age.

On July 12, 2005, after trying to renew his California drivers license near Los Angeles, Alfredo Rios Galeana, now known as Arturo Montoya was identified and after weeks of surveillance was arrested by ICE on charges of entering the US illegally.

His neighbors described Arturo Montoya, whom they had known as for 12 years, as a quiet religious man who ran his own janitorial service. He was active in church and loved to sing spiritual songs and show religious movies in his front yard for all to enjoy. Everyone was shocked to find out they lived next door to a notorious killer and bank robber.

He had been ID'd by his fingerprints that were still on record at Mexico's Attorney Generals office. He was deported over the border where he was met by a group of Mexican AFI agents armed to the teeth, put on a plane and sent to Mexico City where he would be charged with six murders and dozens of robberies and destruction of federal property, kidnapping, extortion and illegal arms possession.

Upon arrival in the capital the Federal District government said they didnt want him in any of the cities' prisons, due to Galeanas afinity for escaping and blowing things up.

They sent him to La Palma Maximum Security prison where he told the press eagerly awaiting Mexico's Public Enemy Number One, that he was a born again Christian, had found Jesus, was sorry for killing and robbing banks and all his loot from the holdups had been spent.

Songs were written in honor of Rios Galeana. Here is the translation of one sung by El Puma de Sinaloa, Fredy Bojorquez in 1990.

I am the bank robber
That the law is looking for
Because robbing from the rich
Gives me great pleasure
They search for me in Jalisco
In Sonora and Monterrey.

10 armored trucks
in Sinaloa state I robbed
Also in Tijuana and Ciudad Juarez
I "visited" several banks.
From the Federal District's jail
I recently escaped.

So that you can catch me again
Its going to be rather hard
for I carry good machine guns
and a legal passport.
They call me Rios Galeana
at your service.

Alfredo Rios Galeana
My name you wont soon forget.
I send out a greeting
and to my friends I met in jail
To all the cops and agents
of the Federal District.