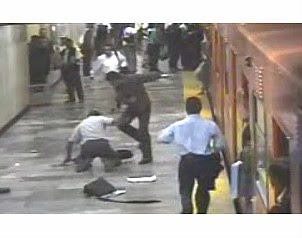 Esteban Cervantes (white) grapples with gunman Luis Castillo (center). Note man in blue shirt rushing to aid Cervantes before he too was shot.


On the evening of September 18, 2009, all seemed normal at Mexico City's busy Balderas subway station. Commuters crowded the platform and watched a metro train arrive in direction to Indios Verdes station. Unknown to them, pissed off Jalisco farmer Luis Felipe Hernandez Castillo who had recently arrived in the capital with 500 dollars had an agenda. He hated the government, whom he believed was responsible for the countries woes. He believed the Calderon administration responsible for Global Warming and believed a famine would soon ravage the nation in 2012.

With a permanent marker he started to write the words "This Government of Criminals..." on the wall at Balderas station, ignored by the commuters. Police Officer Victor Manuel Miranda saw Hernandez defacing the wall and approached him and told him to stop and drop the pen or he would write him up.

Hernandez quickly scuffled with Officer Miranda and pulled out a .38 caliber revolver out of a small black leather bag and shot at him. The crowd on the platform soon scattered and fled in terror as Hernandez shot an unarmed and fleeing Officer Miranda, killing him.

Inside the train that had just pulled up to the station, Hernandez' wild shooting was being observed by the terrified passengers. One such passenger, a construction worker named Esteban Cervantes Barrera reacted instinctively. He hated injustices and always stood up for others. Without thinking and without saying one word to his friend who accompanied him on the train, he darted out of the metro doors and lunged at Hernandez.

Cervantes and Hernandez struggled for a minute as Cervantes sought to disarm the crazed gunman. Hernandez shot at Cervantes, who slipped several times trying to tackle the shooter. A third man approached Hernandez and attempted to also stop him, receiving a gun shot wounds in the hand. The man walked away, to tend his wounds as Hernandez and Cervantes continued to struggle, their fight being watched by stunned onlookers who opted to do nothing and offer no aid to Cervantes, who was now on the floor.

Hernandez then, seeing he had the upper hand in the fight, without hesitating shot Esteban Cervantes point blank in the head, in front of the Metro's Surveillance Cameras, taping the entire incident. Cervantes body slowly grew limp.

As the bodies of Officer Victor Miranda and Esteban Cervantes lay dead on the platform amid scattered sheets of paper and bags, Luis Felipe Hernandez Castillo walked into the stopped train and kept shooting out at the platform at approaching Judicial Police officers. He yelled out to the people on the train that "his beef was not with the people but with the government". He also said "he was doing God's work". Then he said "This is all fucked up", referring to himself having being shot in the right shoulder by a Judicial Police officer who was quickly reaching the train.

Several plainclothes and uniformed cops rushed the train and tackled Hernandez Castillo, stopping the madman's shooting rampage, an event unheard of in the city that usually, has seen everything (An Aeromexico jetliner having being hijacked on Sept 9, by another deranged man claiming to also be doing God's Work) They arrested him and sent him to Reclusorio Oriente prison. 10 people were hurt in the rampage.

After the tragic events at Balderas station, one thing was certain. Two modern day "heroes" had died that day. One in the line of duty, and another acting on instinct. Without a doubt, Esteban Cervantes' attempt to stop Hernandez, gave time for the rest of the people on the platform to flee. His selfless action cost him his life. Only sad thing is that among the hundreds of people at Balderas, and witnessing the events, Cervantes seemed to be the only one brave enough to take action.

Several other able bodied men only watched as Cervantes and Hernandez fought for control of the gun. They watched, and didnt act, as Cervantes fell four times, almost catching a bullet every time he fell, nevertheless getting up each time and rushing the gunman. One final headshot, finally stopped the brave Cervantes.

In a city of 18 million. In a station crowded with several hundred. Only one man had enough balls to rush a man randomly shooting. Esteban Cervantes left behind 5 children.

As of September 21, 2009, the Mexico City Metro System announced they had created the Esteban Cervantes Award for Bravery, a medal that would be given to any citizen committing a heroic act. People in Mexico City also suggested to the city government they rename Balderas to "Heroes of Balderas" station in honor of the two men who died that day trying to stop a deranged farmer with a gun.