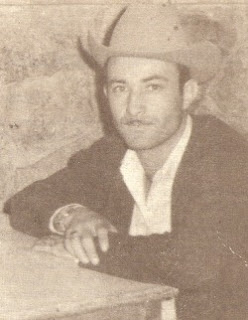 The True Story of Lamberto Quintero

Lamberto Quintero Paez hailed from the rough mountaintop village of Badiraguato, Sinaloa, high in the Sierra Madre, where marijuana and poppy has grown for years.

He came from the famous Quintero clan, whose members formed part during the Mexican Revolution. His relative was Valente Quintero, known for his bravery and machismo, who died in a famous duel with Maj. Abram Elenes after a night of heavy drinking. This shooting was immortalized in a corrido.

Another relative was Eliseo Quintero, famous revolutionary leader in Sinaloa who later became Governor of the state in 1910. He was well known and beloved in Santiago Los Caballeros, where he had schools, homes and the town church built.

Lamberto Quintero and his cousin Pedro Paez Soto had rivalries with the Otanez Lafarga family, another powerful Sinaloa clan. Over drug trafficking, women, petty problems or just misunderstandings, no matter the cause of the feud, it would end in the total extermination of the Lafarga clan and the almost decimation of the Quinteros, over the period of one year.

The Otanez Lafargas came from the town of San Ignacio in southern Sinaloa. They descended from powerful land owners, called Caciques who acted like feudal warlords and ruled over the farmers and land with brute force and violence.

In the 1930's Cruz and Francisco Lafarga grew rich, selling gold they smuggled out of the El Tambor mines and dealing with livestock. Their sons, Alberto, Fortino and Cruz inherited the wealth, ranches and thousands of head of cattle, but the men were careless, wasting away their fortune in racous parties and women. They soon after entered the Drug Trafficking business.

Historians and witnesses to the bloody feud say that it started over a misunderstanding. The Quintero Paez family was already involved in a feud with the Vega and Payan families from El Tamarindo, Sinaloa. This feud originated in 1971 during a shooting at a soccer match in which a Payan was killed.

One day in late 1975, Quintero family members saw Ramon Otanez Lafarga talking to a judicial police officer on a street in Culiacan and opened fire, killing the cop. Otanez Lafarga,  thinking the bullets were in fact aimed for him, fired back, killed Macario Payan, a Quintero associate.

The Lafargas then suspected Pedro Paez of being behind the hit. His cousin Lamberto was surely also involved as the both were closely associated, both providing each other protection and money.

Then began the retributions. Back and forth. Lamberto and his cousin Pedro Paez got into the family problems and Pedro Paez was ultimately shot to death at the Culiacan airport.

On January 28th, 1976, Lamberto left the capital city of Culiacan with his nephew Miguel Quintero, bound for his ranch called El Varal, 3 miles from El Salado. He would always stop at a restaurant in El Salado, owned by Dona Chelita Zazueta.

On the way to El Salado, passing El Carrizal ranch, Lamberto noticed a pick up following them. Miguel also noticed and alerted his uncle who replied they would use their high powered weapons if they needed to.

Thus began a high speed chase. The truck was driven by men from the Otanez Lafarga family. The truck got parallel to Quintero's truck, prompting him to open fire with his AR-15 assault rifle, hitting David Manuel Otanez Lafarga, "El Chito", gravely wounding him. He was then taken to Ovalles Clinic in Culiacan where he died.

The now angry Lafarga's rounded up men and pursued Lamberto all the way to El Colonial restaurant. 3 hours later a white LTD Ford sedan drove around the place. Quintero was on the bed of his truck, casually talking to a friend, where he was ambushed with a volley of machine gun fire. He was taken to Santa Maria Clinic in Culiacan where he died of his injuries.

Two days later, on January 30th, Around 20 men died in a massacre in Culiacan. Quintero family members came under attack when a car full of Lafargas shot up mourners at El Carmen church during Lamberto's funeral and injured several people and bystanders. More pistoleros from the Lafarga clan surrounded Santa Maria clinic and engaged in a bloody shootout on Francisco Villa Street, where nephew Hector Caro-Quintero, the eldest brother of the notorious family of drug barons died.

Quintero gunmen, led by Manuel Salcido Uzueta "Cochiloco" (then a young pistolero working for Quintero Paez) attacked Chito Lafarga's funeral procession in retribution for the shooting at Lamberto's funeral. The shootout at the Culiacan cemetery killed and wounded several men and the day long orgy of blood culminated in a fierce shootout on a residential street in Colonia Lomas del Boulevard where Alberto Otanez Lafarga had a home. Several dozen men died in this confrontation, their bodies sprawled on rooftops, inside cars and on city streets.. Culiacan newspapers announced the crimes and Culichis were shocked that week at the number of wakes and funerals that the bloody feud had left.

The Sinaloa State governor ordered the military to patrol the city of 500,000 to restore order. Fortino and Alberto "Black Hand" Lafarga--having survived the violence-- fled to Mexico City. The wrath of the Quintero's followed them there; Tino died in a barrage of cuerno de chivo (narco slang for AK-47, nicknamed Goat Horn for its distinctive curved magazine) fire outside his home and Alberto was pulled from his truck, beaten with the butt of a AK-47 rifle and shot with a coup-de-grace to the head. The Lafarga family ceased to exist and the Quintero family emerged victorious in the feud.


Lamberto Quintero Paez AKA "El Bonito" (Pretty Boy) was ultimately buried in a concrete and crystal mausoleum at the Jardines de Humaya cemetary in Culiacan where many old time mafiosos have their tombs. His portrait, of him riding his favorite horse, christens the door to his crypt, surrounded by AR-15 shells surrounding his photograph. His cousins Pedro Paez Soto and Gilberto Caro Rodriguez also lie nearby.

The famous corrido Lamberto Quintero was soon written by famous composer and good friend of Lamberto's, Paulino Vargas and was heard on the radio soon after throughout Sinaloa, Mexico and the world.

Another corrido written for Chito Lafarga was also composed but the Quintero's, using their power, didnt allow that corrido to be broadcast anywhere in Sinaloa. Antonio Aguilar immortalized Lamberto's corrido and made a fictionalized movie telling Quintero's life story.

In almost a year, the Quintero Paez's and Otanez Lafarga's blew each other into the next world. Only their corridos, grainy photographs and tombs remain. 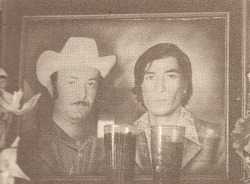 A portrait of Lamberto Quintero Paez "El Bonito"(L) and his brother Luis, painted post-mortem, at their graves at Jardines de Humaya cemetary in Culiacan, Sinaloa, Mexico
Posted by E. C. Perez at 3:07 AM