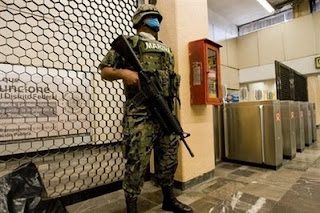 "And I looked, and behold a pale horse: and his name that sat on him was Death."


In 1979, Mexican moviegoers were terrified by the new sci-fi/thriller/drama El Ano de La Peste, starring Alejandro Parodi, Daniela Romo and Jose Carlos Ruiz. The film tells the story of a mysterious disease that hits Mexico City and only Dr. Sierra Genoves (Parodi) seems to notice anything going on. People fainting on the subway, more than usual cases of "bronchial pneumonia" at the city's hospitals. He warns the city government of the possibility of a epidemic in the city and a resulting pandemic.

The city government decides to cover everything up. There is no plague in the city. Shocker right? Its Mexico. Nothing ever goes wrong in Mexico. In the seventies (pretty much as long as the PRI was the ruling party) NOTHING ever went wrong in the country. Sure problems here and there but "nothing serious". Ever.

So in the metropolis of 18 million, nothing is wrong. Health and Sanitation crews go through the city spraying freaky looking neon yellow "disinfectant" foam on buildings, inside homes and in one memorable scene, on a group of homeless men in sitting on a sidewalk in a drunken stupor. Buildings are evacuated due to "gas leaks". Bodies are quietly picked up in garbage trucks and buried in mass graves outside the city.

So Dr Sierra Genoves, while he isn't boinking his lover, hes out trying to warn people about the plague. A visiting diplomat from Norway, dies from the disease at the city airport and the news is out. Something is wrong in the city. By Christmas Eve, some 5 months after the disease is first detected, Mexico City is a dead city, a barren landscape devoid of life, trash and bodies littering the streets, its surviving residents scared of contact with other humans, gas mask wielding city police beating the mobs who demand medications.

As the President gives a Christmas toast with his guests and Cabinet, Mariachi band playing Las Mananitas, he smiles and proclaims:

"During my term, there wasn't any, and there will be no, plague".

Dr Sierra however, giving up hope, gets a flat tire in a ravaged neighborhood. He asks for helps and a passerby instead, runs away from him. Defeated, kicking trash, he walks into the night, passing debris on the street and cadavers.

Reading the Breaking News on ElUniversal.com.mx on the night of Thursday April 23rd, I was reminded of this movie. I remember the scenes of residents wearing gas masks throughout the city, the gas mask wearing and billy club wielding cops beating the people who demand answers. The mass suicides at the pyramids of Teotihuacan of people imploring the Aztec gods for some sort of mercy.

"Influenza epidemic strikes the Federal District (Mexico City) read the headline on April 23rd. Reading Influenza I remembered high school history class. The 1918 Spanish Influenza pandemic which killed more than 40 million people. Spitting in the streets became illegal. I worried when news outlets started to use the words "potential pandemic". I wondered if Mexican authorities would be truthful during a health crisis like this. I quickly realized that the answer was NO. Probably Not.

You see, this epidemic of swine flu was detected as early in March and possibly as far back as December. During March and the first weeks of April, many people fell ill with what seemed was a common flu but then they died. Quickly. Healthy people woke one day fine, fell ill the next day then died days later. Dozens died. On April 23rd, the Ministry of Health broke the news. It was an Influenza epidemic in the city.

But not just in the city. People started dying in villages in Oaxaca. In the city of San Luis Potosi. Then cases popped up in Hidalgo. Then Veracruz. Then Mexicali, Baja California, near San Diego. Tlaxcala state. Zacatecas state. Deaths reported in Guanajuato. The United States had reported some cases in Southern California and Texas. Then a group of high school students fell ill in New York, they had visited Cancun during Spring Break. 20 cases so far in the US. Some in Nova Scotia, Canada. Others reported in Israel and New Zealand. Almost a dozen countries reporting people stricken with Swine Flu symptoms.

Then I noticed something peculiar. There was virtually no reports of the doctors and nurses who fell ill and died because of this outbreak. No attention was paid to the claims of a doctor that allegedly "dozens and dozens of people" had been dying in city hospitals since March but doctors were told NOT to report the cause of deaths as "influenza". They were told to put "heart attacks" or "pneumonia". The government death toll of 103 that stood as of April 27th, was far far too low. How many had died of Influenza but had been misdiagnosed? Maybe the doctors thought they had died from a common cold? Or flu? Or a heart attack? or pneumonia?

All of the deaths have been in Mexico. All the other cases abroad have been minor, and most of the victims well on their way to recovery. Why? What was the disease so lethal in Mexico? Questions that were not answered quick enough. Where had the disease come from? Why Mexico? Was it man made? Or somehow mutated from pigs, birds and humans? How many people had died from it, since March? All year?. Questions.

Only time will tell and the world is anxiously waiting and watching to see if the "Gripe Porcina" outbreak as it is called in Mexico, turns out to be the worlds next global pandemic.

Will authorities in Mexico proclaim 'There isn't and wont be any plague here"? Time will tell.
Posted by E. C. Perez at 2:08 AM