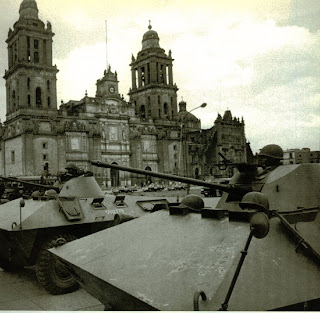 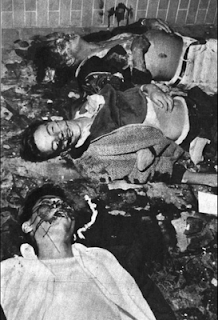 A helicopter hovered over the heads of thousands of protesters at the Plaza of the Three Cultures in Mexico City. From the helicopter shot out two bright flares that illuminated the plaza. "Operacion Galeana" had begun.

Shots rang out from the third floor and the roof of the Chihuahua Building at the Tlatelolco Housing Complex where the plaza was located. Men mixed in the crowd and wearing a white glove on their left hand also took out concealed guns and started shooting at the protesters.

What followed was a 90 minute shower of bullets in which more than 300 men women and children were slaughtered. The Army had surrounded the plaza and thinking they were under fire from potential agitators in the crowd, opened fire on the people who were peacefully protesting. Hundreds died shot to death and stabbed by the soldiers bayonets. Thousands attempted to flee the plaza, stumbling over Aztec ruins and trying to find refuge in the Iglesia de Santiago church.

"Open the door!! They are killing everybody! For the love of God open!" the horrified protesters screamed as they pounded on the door of the church. No one ever came to their aid. No one opened the door. Many died at the door, shot and bayoneted to death.

Those who ran found that the plaza was completely surrounded by city police and the city's riot police. Those who were lucky were simply beaten bloody by the clubs of the police officers. Bloody, broken and beaten but lucky to be alive.

Others ran into the apartment buildings at Tlatelolco pounding on doors and yelling at the residents to open and shelter them. That was no help. The sinister men dressed in civilian clothing and wearing the dreaded white glove on their left hand were members of the ruling party's Olympia Battalion, a violent paramilitary sort of death squad, designed as a secret police and made up to combat the threat of Communism and violence that the student movement of that year posed to Pres. Gustavo Diaz Ordaz's authoritarian regime that ruled Mexico that year.

Many of the men in the Olympia Battalion received combat and self defense training in the School of the Americas and were trained with the help and support of the United States Ambassador in Mexico City. Many of their weapons and ammo was provided by the US army.

The rude and crude men with white gloves would break into the apartments and yell obscenities and drag out the young students out to the hallways and shoot them dead. They rarely took prisoners that night. The order was to squash the student movement. Even the residents, simply for offering the students shelter, were deemed communist sympathizers and would also be killed. Dozens of working class families died that night.

After the massacre, the army rounded up the bloody bodies, dead and broken, crushed by tanks, and tossed them into dump trucks and garbage trucks. Then they hosed down the plaza to wash away the blood and all evidence of what happened that night. Few reporters were allowed to photograph or film anything, only government controlled news media was allowed there that night.

Many of the bodies were said to have been buried in mass graves on the outskirts of Mexico City and others were thrown into crematoriums at the army bases.

The next morning, a few newspapers reported a small incident at Tlatelolco. Violent students holding a rowdy protest had shot some soldiers and the soldiers were forced to open fire on the protesters. Some soldiers had been killed in the fight and it was said 30 people were dead total with hundreds arrested.

That was the "official" government version of the incident. The dream of democracy in Mexico was crushed and extinguished that night at Tlatelolco.

President Diaz Ordaz along with his Secretary of the Interior, Luis Echeverria Alvarez had planned to do something to end the student movement of the 60's. Along with Secretary of Defense Hermenegildo Cuenca Diaz, they devised "Operacion Galeana", which would be implemented on October 2, 1968, a week before the start of the Olympic Games in Mexico City. In "The Art of War" one of the main principles is to "suppress the enemy using no force". That military principle was ignored on October 2nd. They needed to show the world Mexico was capable of hosting the games and any threat to the stability of the nation had to be repressed.

The motto of the Olympics that year was "Mexico 68: Anything is possible with Peace".

The man responsible for the massacre of Tlatelolco, Luis Echeverria Alvarez, was elected President of the Republic in 1970.

None of the people responsible were ever tried for genocide.
Posted by E. C. Perez at 4:27 AM