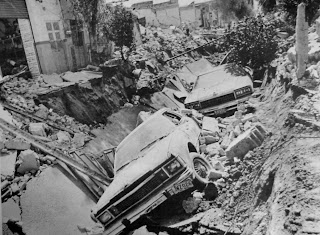 Cars lay buried in the ruins of a blown up street in Guadalajara after the Apr. 22, 1992 explosions.

When they built the Colector Intermedio del Oriente under Reforma district in the southeastern part of Guadalajara, Jalisco, Mexico, they found out the sewer line would hit several subway tunnels. Rather than over, against gravity they would build the line UNDER the tunnels. Years later these errors in engineering would prove catastrophic to the city of 4 million people.

The strong smell of gasoline or paint thinner wafted over the streets of Analco neighborhood in the Reforma district of the city. The April heat was hitting the city and it seemed that the hotter the day, the stronger the smell. Residents would find the smell would come from the water faucets and even the toilets. What was the source of the smell?

Several residents called the city and complained.On April 20th, They called the city's water and sewer department, SIAPA. Something needed to be done, the children were getting dizzy and it was hard to sleep at night. The smell of gas was strong.

On April 21st, SIAPA department workers were sent to inspect the streets of the Analco neighborhood and that night firefighters from the Guadalajara Fire Dept. found the source to be the sewers. The mysterious gasoline smell was coming from under the streets. The firemen opted for leaving a few manholes open and letting the fumes dissipate in the air rather than build up underground. Further inspection of the sewers were scheduled for the next morning, April 22nd.

The city goverment decided to not order an evacuation. That would probably just cause panic among the thousands of residents of Reforma. Telling them their neighborhood was a ticking time bomb was foolish. Such panic would cost the city money. Trinidad Lopez Rivas, the city's fire chief decided not to order an evacuation pending further inspections of the city's sewer system. In March 1983, Sierra Morena Street had exploded, causing dozens of injuries. A nearby clinic had illegally dumped chemicals into the sewer causing the blast. Would there be a repeat of that event?

It was 9 am on April 22, 1992. People drove to work, rode the city buses to and fro and children walked the streets. Vendors sold their food and drinks in little stalls on street corners in the neighborhood, a typical spring day. A group of firefighters descended into the sewer in order to find out where all the gasoline was leaking from.

At 10 am, the search was called off. At that time, white steam was seen pouring out of storm drains and manhole covers were popping, shooting high into the air. The firefighters had not yet reached the surface when five minutes later, a spark, perhaps from a lit cigarette, or a pilot light, or the spark of a manhole cover being dropped into place, unleashed a huge explosion. The ground under Gante and Aldama Street exploded in a huge cloud of dust, hurling cars, buses and trucks into the air like toys and tearing people apart. Eight kilometers of street exploded, one after another. Gante Street exploded. 20th of November St. exploded, Violeta St. exploded, Rio Nilo St. exploded, Doctor R. Michel St. exploded, Corregidora St. exploded, ten huge blasts, ripping apart the streets, and blowing up the adobe homes lining them, killing almost everyone who were on the streets at the time. 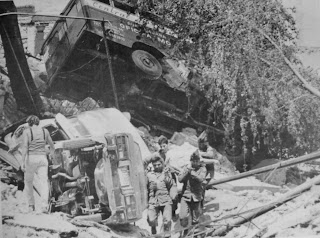 A city bus full of people fell into one of the trenches, its passengers killed or seriously injured. A big rig landed on top of a house. A pickup truck fell on a crowd of people pleasantly eating a snack at a taco stand. A Telmex telephone employee working on a telephone line was killed, his body cut in two. Another headless body, hung grotesquely entangled on a telephone pole. A enormous mushroom cloud of dust rose over downtown Guadalajara and the explosions sounded like thunder. Stunned witnesses wondered what was happening in the direction of the Reforma district.

The emergency calls started pouring into the Red Cross stations in the city. A bus full of people had been swallowed up by a hole in the street. A whole street had exploded. Many people were trapped inside their collapsed homes. There were bloody, dirt covered bodies everywhere. There had been in explosion. Something ghastly had happened in Analco.

Rescue workers and ambulances were met by dozens of people, screaming and crying running for their lives away from Gante St. "The city is blowing up!" one man cried. They wanted to get away from the streets that were erupting beneath them. Radio stations were reporting what had happened in an alarmist sense: 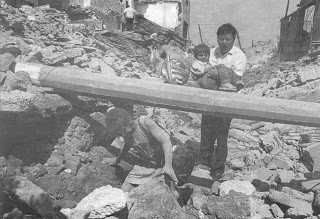 For an hour after 10:05 am, more explosions rocked the area. Calzada Gonzalez Gallo blew up. Calzada del Ejercito also exploded. Sometime after 12 noon, residents of the city, in fear, popped open the manhole covers to let the fumes dissipate in case there was any gas under their streets. At 1:38 PM, several neighborhoods including Mexicaltzingo, 8 de Julio, Polanco and La Nogalera as well as downtown Tlaquepaque, a Guadalajara suburb were evacuated as a precaution. Residents of the other three sectors of the city, Juarez, Libertad and Hidalgo, for fear of the entire city exploding in a mass cataclysm, hopped in their cars and fled the city to other towns or "to the hills."

Residents of the Reforma borough got to work right away, digging out the survivors and carrying them on improvised stretchers; a wooden plank or a broken door. The broken bodies of men women and children were pulled out, covered in dust and some horribly mutilated and taken to a nearby stadium for identification. Ambulances drove in and out of the neighborhood all morning and afternoon. Miles of streets had exploded, following the Colector Intermedio del Oriente sewer line. 20 city blocks had blown up. But what had caused the explosion? Residents had complained of a gas smell. Now the city and survivors were asking: Why was nothing done? 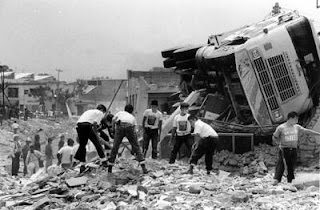 Jalisco state Governor Guillermo Cossio Vidaurri flew over the ravaged area. It looked as if Guadalajara had been bombed. Where streets, sidewalks and trees once were, now it was a jagged deep, debris filled trench full of rubble and cars flipped upside down or buried as if by a pissed off giant. He saw swarms of people, soldiers and police crowding over the collapsed buildings, rescuing the injured and bringing out the dead. Who was responsible for the disaster? By late evening on April 22, 180 bodies had been recovered from rubble, hundreds more injured and more than 10,000 were made homeless.

A hasty investigation quickly blamed the disaster on the accumulation of volatile Hexane gas in the sewers. Leaked Hexane mixed with Methane gas, a byproduct of human waste had caused the sewers to catastrophically explode. The mayor of Guadalajara Enrique Dau Flores quickly lay blame on a cooking oil factory La Central, which was near the destroyed neighborhood.

The manager of La Central told the media "I refuse to be a scapegoat in this tragedy. There has been no leaks here at the plant". Checks conducted in the blown up sewers found large pools of gasoline. The residents had complained of a "gasoline" smell not Hexane, which has no smell .President Carlos Salinas de Gortari toured the devastated area and gave an ultimatum: "The people responsable for the disaster must be found in 72 hours".

The people didnt believe the city's explanation that La Central was to blame. Further investigation found the soil around a Petroleos Mexicanos (PEMEX), Mexico's Oil monopoly gas distribution plant, saturated with gasoline. The ground was wet and the stench of gasoline was strong. The gasoline pipeline from the huge Salamanca refinery in Guanajuato state to the city of Guadalajara ran nearby. The plant was also blocks away from there the explosions originated.

Two pipelines had been laid together, one from one kind of metal and another from another type. This caused a chemical reaction between the two, causing them to rust and form holes. One pipe held gasoline, the other water. The gasoline leaked into the sewer through cracks in the tunnels and the pools of gasoline formed undetected for weeks. Rather than the gasoline flowing freely in the sewer they were backed up by a U shaped plug that went under a Subway tunnel. The gasoline flowed but the fumes were stuck with nowhere to go. That is when the residents began to notice the smell of gasoline. The sewers were pressurized bombs, only needing a tiny spark to set them off.

In all, more than 230 people officially died in the sewer blasts with hundreds more injured. Not surprisingly as tends to happen when a disaster happens in Mexico, the survivors dispute the final death toll. Many recall seeing hundreds upon hundreds of dead, perhaps the death toll being 1,000. Photographs were published of dead bodies bearing the numbers 923 and 700, but the goverment atributted these numbers to the erroneous double counting of cadavers and bad coordination among the places storing the bodies.

Several city government officials were jailed for not ordering an evacuation of the Reforma district and trying to cover up what was going on. A tragedy that could of been avoided. Mayor Enrique Dau Flores resigned as well as Jalisco Governor Guillermo Cossio Vidaurri.

Now everything is rebuilt in Reforma, with a few empty fields where buildings once stood, as the sole reminders of that fateful April morning. People now tell macabre tales of seeing the ghosts of the victims late at night, screaming and crying, haunting the neighborhood where they died instantly all those years ago, when bad planning, negligence and stupidity all combined to produce the worst disaster in Guadalajara history and one of the worst industrial disasters in Mexico in recent memory.
Posted by E. C. Perez at 2:49 AM